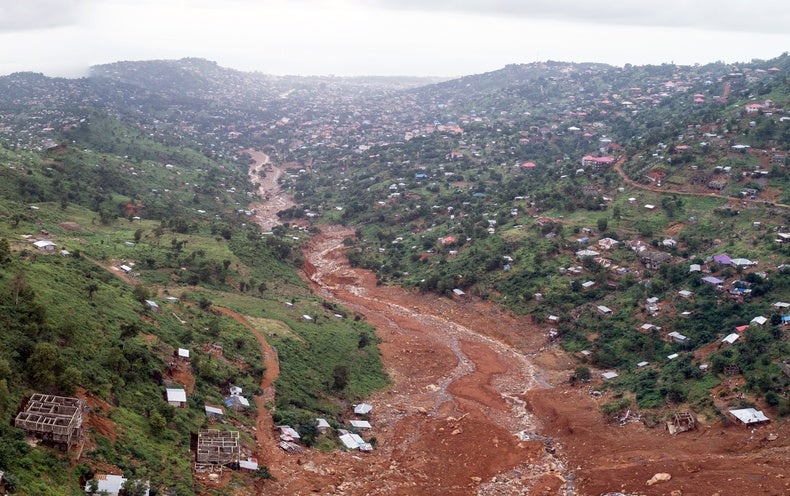 A devastating mudslide devastated Sierra Leone’s capital, Freetown, in August 2017, burying homes and killing at least 1,100 people. Triggered by weeks of unusually heavy rain, it was one of the worst environmental disasters the region has seen in years.

More than four years later, scientists fear this could happen again. Rainstorms and flooding in some coastal regions of West Africa are expected to intensify as the climate continues to warm.

And deforestation could make the situation worse, new research shows.

A study published this week in Proceedings of the National Academy of Sciences notes that deforestation contributes to an increase in the frequency of afternoon storms in some coastal regions of West Africa. The larger the clearcut area, the stronger the storms.

That’s because forests help regulate the local climate, according to the study’s authors, led by Christopher Taylor of the UK Center for Ecology and Hydrology.

In the tropics, trees tend to have a cooling effect. When these forests are destroyed, the surroundings heat up.

What exactly this means for local precipitation regimes depends on the region.

In some places, such as the Amazon rainforest, studies have shown that deforestation is actually causing the area to dry out. Trees help add moisture to the atmosphere, while deforestation has the opposite effect.

But in coastal West Africa, nestled by the ocean, it’s a different story. The warmer temperatures above the land strengthen the sea breeze blowing from the water. The breeze helps trigger thunderstorms.

The result is more heavy rain.

Due to climate change, “the whole region has seen an increase in the frequency of convection storms,” ​​Taylor told E&E News in an interview. “But the areas that have been deforested have seen a much larger increase than the areas where we have not seen deforestation in the past 30 years.”

In fact, heavily deforested areas now experience twice as many storms as 30 years ago.

The researchers analyzed three decades of data to complete their study, focusing on a lush swath of southern West Africa stretching from Guinea to Nigeria. They looked at both land-use change and satellite observations of thunderstorms in the region.

In other words, deforestation worsens the effects of climate change, worsening storms.

The study region includes a number of heavily populated towns. Freetown is located there, along with Conakry, the capital of Guinea, and Monrovia, the capital of Liberia.

The new study highlights “a second, previously unrecognized impact of deforestation on flooding, as experienced in some of the least resilient cities on the planet,” the authors write.

The results suggest that deforestation makes severe storms even worse – in addition to the influence of global warming, which already increases the risk of heavy rains and flooding. Recent studies have suggested that extreme rainfall events, the kind that can cause damaging flooding, are increasingly intense in southern West Africa.

This means that local authorities may have to plan for an even worse climate future than they would expect from global warming alone. Building resilient infrastructure – bridges, roads, buildings and other structures that will withstand climatic disasters in the future – may need to consider both factors.

“Climate models could suggest a modest increase in the frequency of storms,” Taylor said. “But in fact, locally, where there is deforestation, it could be much more.”

In places like Freetown, local communities are working to slow deforestation. But the effects of warming are relentless as long as greenhouse gases continue to flow into the atmosphere.

Speaking at an event held at the last United Nations climate conference in November, Yvonne Aki-Sawyerr, Mayor of Freetown, highlighted the growing risks climate change poses to her city.

This makes these communities even more vulnerable to floods and landslides.

“What we don’t talk about enough is that climate change, for millions and billions of people, isn’t something that’s going to happen – it’s something that has happened.” , said Aki-Sawyerr. “And the consequences of this are serious.”

Spin Control: Initiatives, vetoes, Klingon and other predictions for 2022